I cringed and tensed up all at the same time. It was like an ice cube being rubbed down my spine. No one could forget that voice from the shadows. So I knew instantly who it was, getting my attention from directly behind me.

“How could I not?” I said. “It’s not everyday that someone hands over a hunk of Sasquatch and demands that I cook it for them.”

“And it was deelishus grillerboy. I still tell my acquaintances about dat Spring day. A fond memory for Da Butcher, if I do say so myself. But dat was den, and now a new season brings a new offering.”

“Nope! Dis is a visit of convenience only” he said. “A seasonal offering, if you will. But unique, nonedaless.  A special delivery just for you and da family to enjoy dis autumn season, because as you will see, we grow ’em big where I come from, and I think—no,  I insist, dat you have some.”

As the familiar overcoat unfurled, I no longer felt a reason to shy away or hide. Out came the package, wrapped in plain white butcher paper, as always. He tossed it onto the patio table in front of me.

“Enjoy grillerboy, but don’t mess dis up. Deez are delicacies, wit no second chances, if ya know what I mean.”

As I picked up the package, the wind started to pick up. Creepy coincidence, but then again, it is fall, and changeable weather was the norm. Leaves were flying and falling all around.

The package was light, maybe a two or three pounds, and actually felt a little bony.

“B.W. What’s this mean?”  I asked, not knowing if I really wanted an answer.

“I’ll let you figure dat out, grillerboy. Until next time, and there WILL be a next time. I’m always around, ya know. I’m watching.”

I unwrapped the plain white package, wondering all along what the heck BW could stand for. While digging in like a kid on Christmas, I noticed the shape immediately.

My coals were burning, and shoved to one side of the grill. I seasoned the wings for a generic cook, meaning fresh cracked black pepper and a good dusting of kosher salt. They were then laid on the grill, indirect side, for a good smoke.

I just assumed they would take as long as any other wing, so I was prepared for about an hour long cook, at nearly three hundred fifty degrees.

Not knowing what type of “taste” to expect, I started a mopping and grilling sauce consisting of some ingredients that I had on hand. Some stir fry sauce, sesame oil, brown sugar, fresh garlic, soy sauce and Sriracha sauce for a little heat. There was also a bit of rice wine vinegar and a dose of Cajun seasoning thrown in. Heck I don’t know. Whatever was in arm’s reach went into that bowl. When the bat wings looked about halfway done, I gave ’em a good mopping and flipped ’em  like the beast they came from. 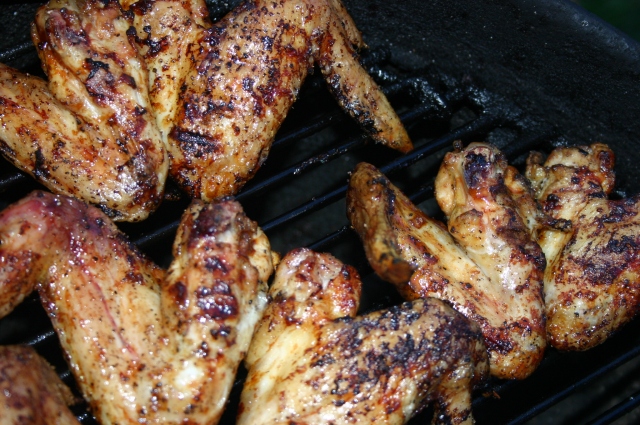 I gotta admit, the aroma coming off these things was pretty good, not rodent-like at all, ha ha.

The mopping and grilling continued, until I felt the wings were juicy and done. Taking them off the grill was a bit creepy, but had to be done.

The wings were tossed in a bowl with the rest of the sauce, just to let it glaze up a bit. The freshly grilled bat wings were paired with a helping of grilled green beans, or scream beans, if you prefer, and garnished with a few cream cheese stuffed Dancing Spirits Peppers.

A seasonal grilled meal, just in time for Halloween. Or if you prefer, All Hallows. Beggars’ Night. Devils Day, or Mischief Night.

“Outstanding Butcher, outstanding. And outrageous. And crazy. And creepy. And I don’t want to think about what I’m eating. But I’m gonna eat all of it…”

With that The Butcher pulled his overcoat tight, tipped his fedora in my direction, winked and said, “Trick or treat grillerboy. Trick or treat.”

“Definitely a treat” I replied, “A treat with a trick wrapped up in it”.