Water droplets hung like lingering teardrops from a bad relationship. It was, of course, the rains. Day after day, sometimes heavy, sometimes like today. Just a swirling mist that mimics an ocean spray. Not biblical proportions mind you, but enough that area residents have started counting the days. Enough also, that an habitual griller can’t simply wait for the weather to clear up. Quality meat that has been laid on a sizzling grill is always a good time. But in times of less than perfect weather, as the fog and swirling mist provided on this day, it can be downright lustful. “And it was.” The pork had marinated in a last-minute combination of sesame oil, Worcestershire and onion. It enjoyed

the soak for about seventy-five minutes, perhaps even ninety. The slight chill in the air, courtesy of the wind and mist, demanded that our meal have a bolder, more flavorful slant, and Dr Dread’s Jerk Seasonings had the right prescription, hehe. After removing from the marinade, the tenderloin was generously rubbed with his famous Jerk Seasoning. And because we’re blessed with many great farmers markets in our area, I’m adding freshly peeled beets, tossed in olive oil, salt, and cracked

black pepper on the grill as well. Now opinions on grilling are as unique as there are grillers, but when it comes to searing a fine piece of meat, there’s usually two schools of thought. We sear that meat first thing over the direct heat of a good hardwood fire and then move to the indirect side, or, that piece of meat in question is initially laid on the indirect side until almost up to temperature, and then seared as the last step before removing from the grill. While it doesn’t matter to this guy which side of that fence you’re on, I’m just saying that a bit of both is not a bad thing. Carry on. 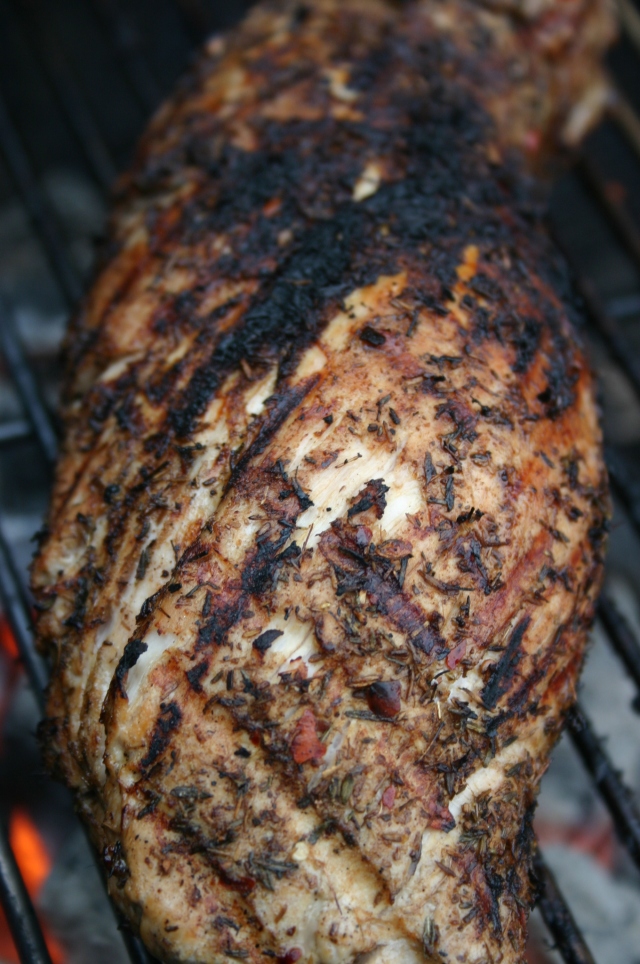 The pork and beets performed as expected, so at the 160 degree mark I removed the meat and plated it, leaving it to rest. The beets were scooped up in anticipation of a new experience. Aided by another farmers market find, a fresh-baked black olive and lemon zest loaf of bread, I could look up, squint, because you know, it was raining, and know that the atmosphere was going to be sunny and warm inside.