Trying to be the organized sort, I’ve been tagging and marking the packages of meat that make their way into our freezer. A good problem indeed, when there are choices to suit one’s momentary, tasty desires. And so when a package is taken out to thaw, marked very proudly as a flank stank, this griller may begin to imagine all the things associated with this choice. He may go so far as to come up with a marinade and rub specifically designed for that choice. Ah, the best laid plans…

Plans can change as fast as the flap of a hummingbird’s wing , or in this case, the flash of the butcher paper, when the reveal proves that the meat you thought to be, predicted to be, and planned for,  just isn’t the meat that’s in that package. Like some sort of heavenly, meat miracle, that flank steak was somehow transformed into a small, trimmed brisket. There should’ve been a ray of light beaming down on that package when it was opened, complete with a choral group behind me harmonizing a quick “hallelujah!”.

But just as quickly, my planned, later in the day, quick sear of a flank steak was also transformed…into a longer, low and slow smoke, and suddenly, the ticking of the clock became a little louder.

With brisket, simple always works, so a goodly amount of seasoned salt and cracked black pepper were generously rubbed into the meat, as firmly as you’re comfortable with, and then the meat was set in the fridge while I set out to get that smoke rolling.

The coals were getting to where I needed them to be, around 220 to 225, so I put together a quick mopping /dipping sauce. The recipe, with hearty beef friendly flavors, came from our friends over at AmazingRibs.com, and can be found here. Once at the beginning, and at least every 30 to 60 minutes, that baby brisket received a good old slathering of that mopping sauce, and the aroma was intoxicating. My little brisket was unceremoniously yet gently laid on the rack, temperature probe inserted, and mesquite wood smoke filling the yard like a warm, aromatic hug. I hugged back…

All that was left now was to wait.  Wait and hope that the brisket hits the stall point in measured time so as to continue through to delicious beefiness. Man my mouth is watering just remembering and rethinking this smoke. But for now, I decided to assume the popular, pit side position of lounging in a freshly rewebbed, retro style lawn chair. Nothing spells backyard summer comfort more than those vinyl straps along ones backside, complemented with a cold, hop related beverage. And if the triple digit heat and nearly liquid humidity didn’t convince you that summer is here, well, this backyard situation confirms the season. Cardinals, robins, and even the sparrows are taking turns flying back and forth through the sprinkler like those little kids through a slip-n-slide, just to get a little relief. Bees are walking along the ground because it’s just too hot to fly. And these conditions also shorten the ticks of the clock needed for smoking meat to get up to temperature, so when this baby brisket reaches 150 degrees and is starting to get that bark, 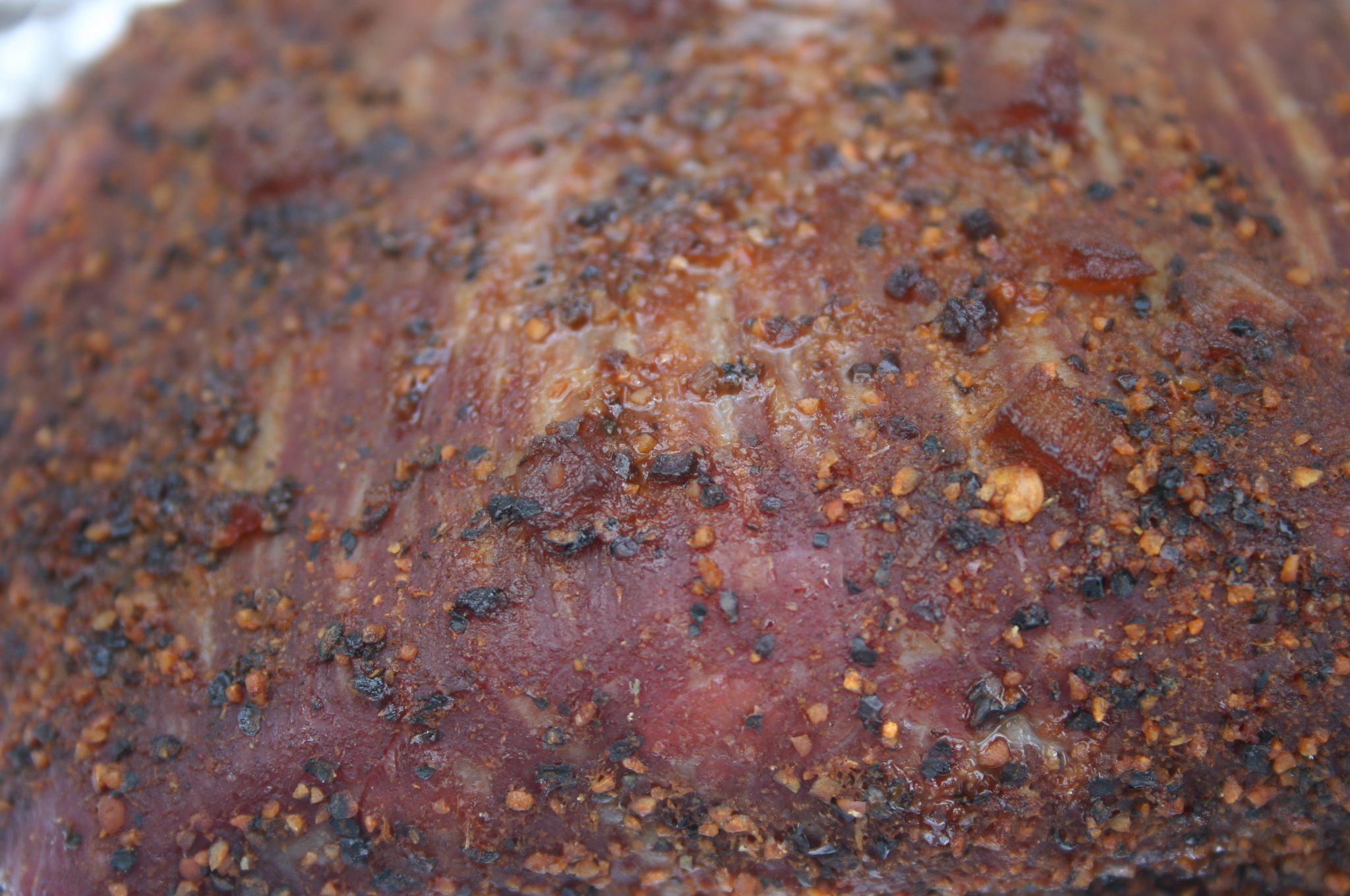 It, too, gets a relief from the heat with another slathering of mop sauce, a generous pour of my favorite drinking fluid, and then a full wrap of aluminum foil, only to be laid back on the smoker for the rest of it’s journey.

At 200 degrees, the foil wrapped brisket was removed from the heat, wrapped in some old towels and given some alone time in an insulated cooler, letting science take over to turn the brisket into dinner. I don’t pretend to know all the intricacies of this process, because all I know is, it works, and it’s delicious. After a couple of hours, the little beauty was unwrapped and announced itself to the world, or to my world anyway.

It was beefy, with a texture that allowed itself to be sliced as needed while even providing a small sample of burnt ends. The aroma of pepper, steak sauce, Worcestershire, beer and several other spices reminded me of a really good smokehouse, providing beef how it was meant to be served. Smoked low and slow. 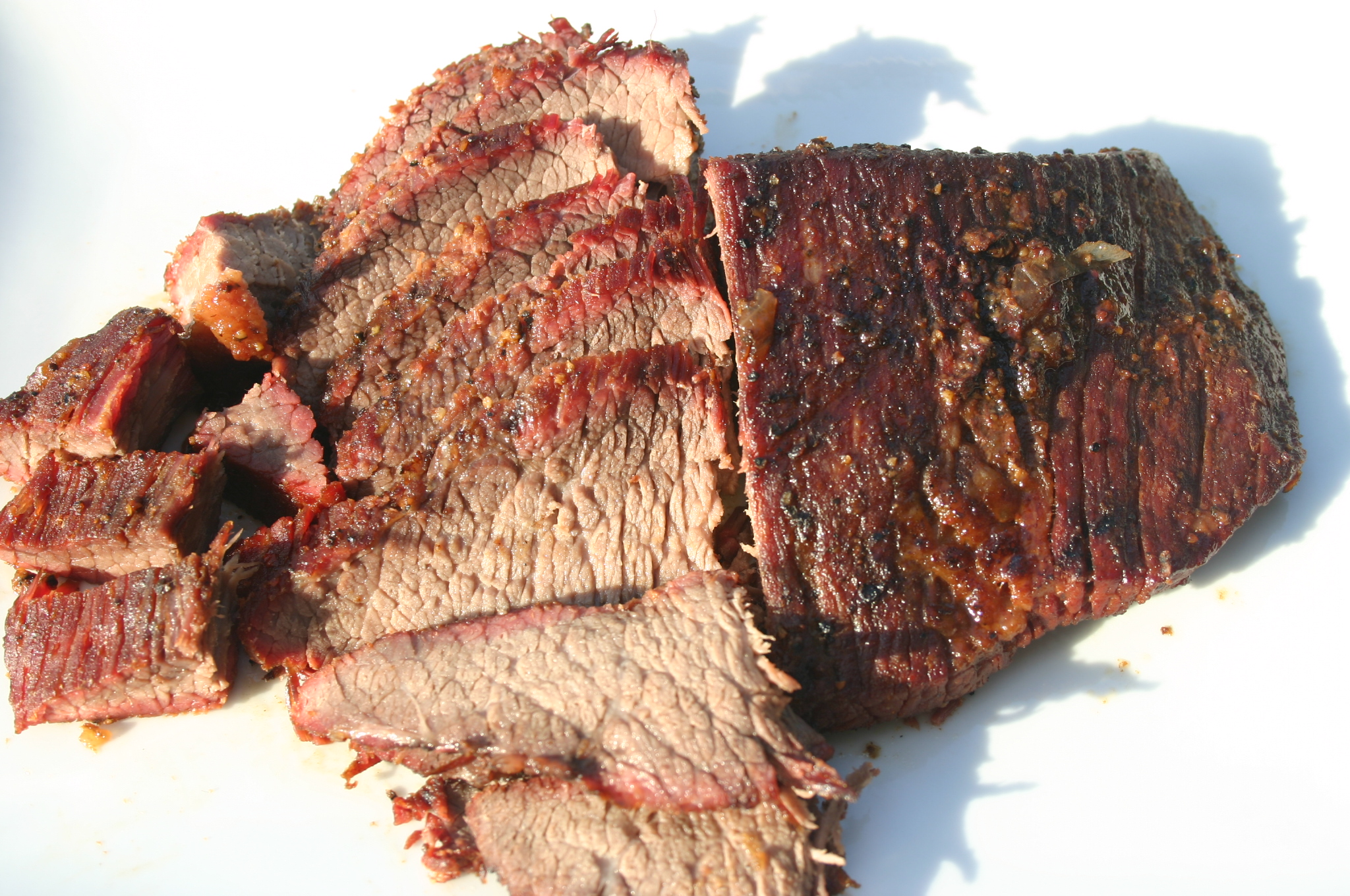 “Because Life Is better Wood Fired”

← Sweet Tea Brined Chicken With Lemon And Herbs
BBQ Goodness, Family Get Togethers, and a T-Rex After Party →