Early Morning Smoke: Pulled Pork With A Side Of Sunrise

Not a creature was stirring, not even a mouse.

Until the predawn peace was broken, meaning a few choice words were uttered after running into a small stool or something in the yard. Then I’m pretty sure the creatures were all stirring, including this years garden nemesis, our new backyard chipmunk. I’m sure he was out there somewhere. Always is.

It was still dark when I ventured out that morning: Darkest right before the dawn, as they say. And I was on a mission. I had to get that pork butt on the smoker early, so as to enjoy some pulled pork later. Inconvenient, you ask? Sure, but the rewards usually outweigh the inconvenience, and on this morning, that is just what happened. Because somewhere along the line, as I was out there prepping the smoker by the last of the moonlight,  the sun tapped the moon on the shoulder, signifying that it was time to exchange places. And as they performed their daily switch, I was witness to one of the most picturesque sunrises I’ve seen around these parts. It was hypnotizing, to say the least, and I’m sure that a picture won’t do it justice, but here it is anyways. 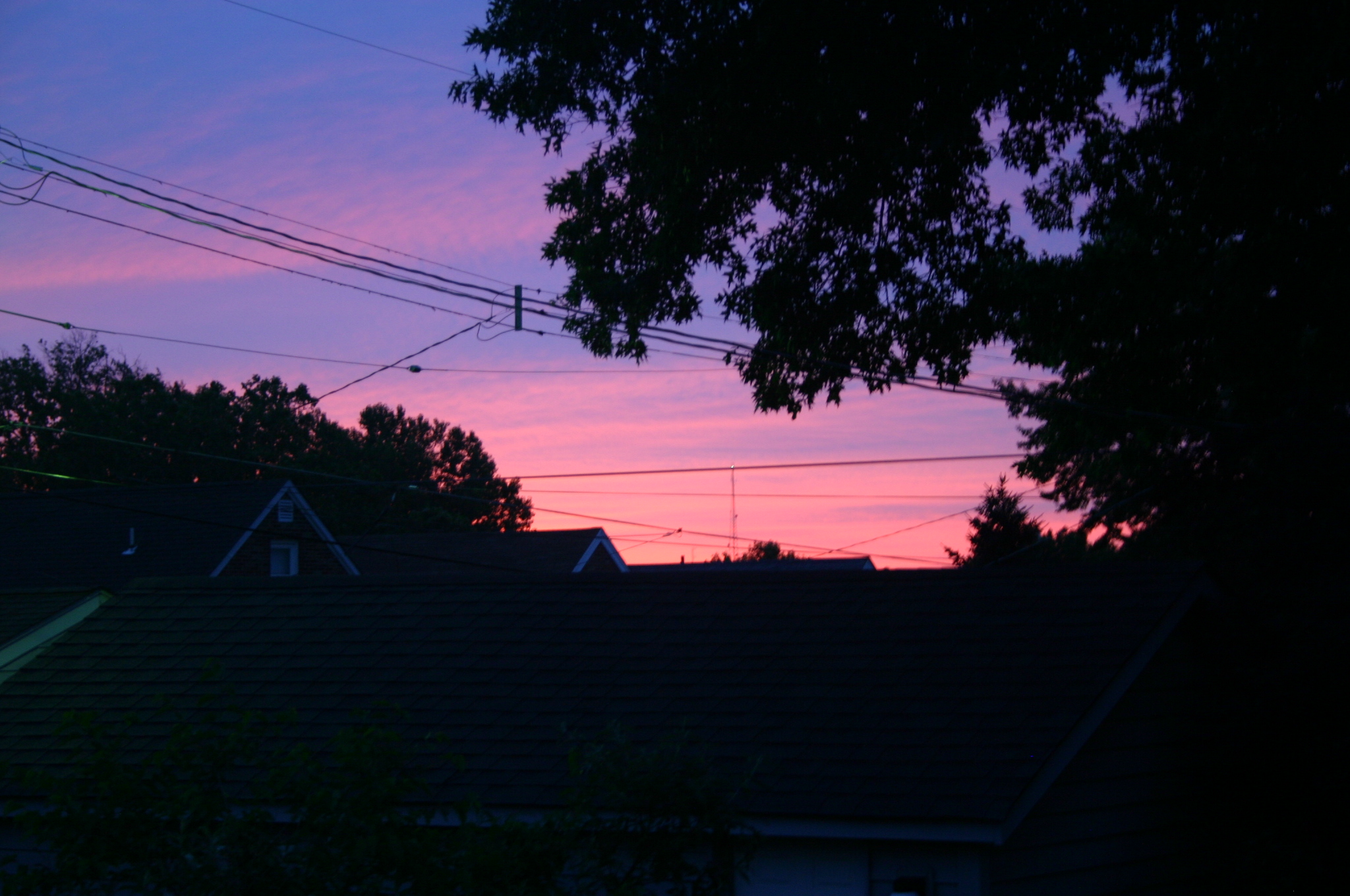 So with blood trickling down my leg, and camera in hand, I forged ahead with my original goal, because as you and I both know, that pork butt isn’t gonna parade itself out here and jump on the rack by itself. It had been thoroughly rubbed with yellow mustard and seasoned with my favorite rub the night before. Then, this morning, another helping of rub was pasted on the meat, and left to sit while my fire was built. 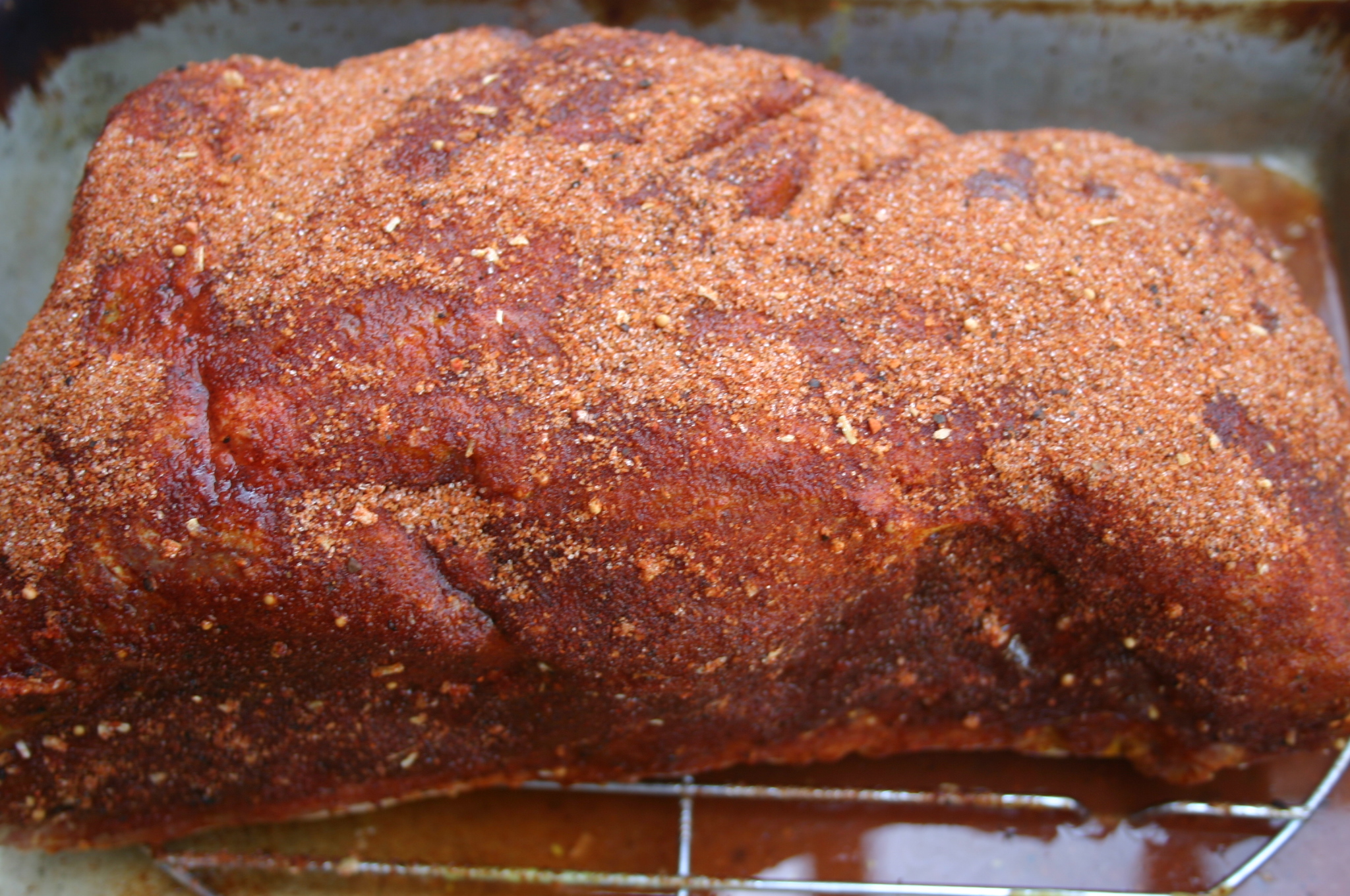 With the smoker generating flavor from hickory, applewood, and peach, all that was left to do was to position the pork in the smoker, over the water pan and in direct line to catch all those ribbons of smoke as they make their way up to and through the vent.

With the meat on the grill, and the smoker all cared for, I did what any self respecting person would do after getting up so early on a day off…I went back inside for a nap. I let the meat and smoker do what they were brought here to do, and my participation wasn’t necessary until much later, when all the basting was to begin. This particular day called for Tennessee Red Sauce made by the award winning folks over at Blues Hog Barbecue Sauces. It’s peppery, sweet and vinegary, and in my book, well, that’s darn near perfect for pulled pork. And when used as a basting sauce during the last couple of hours, it starts looking like this… 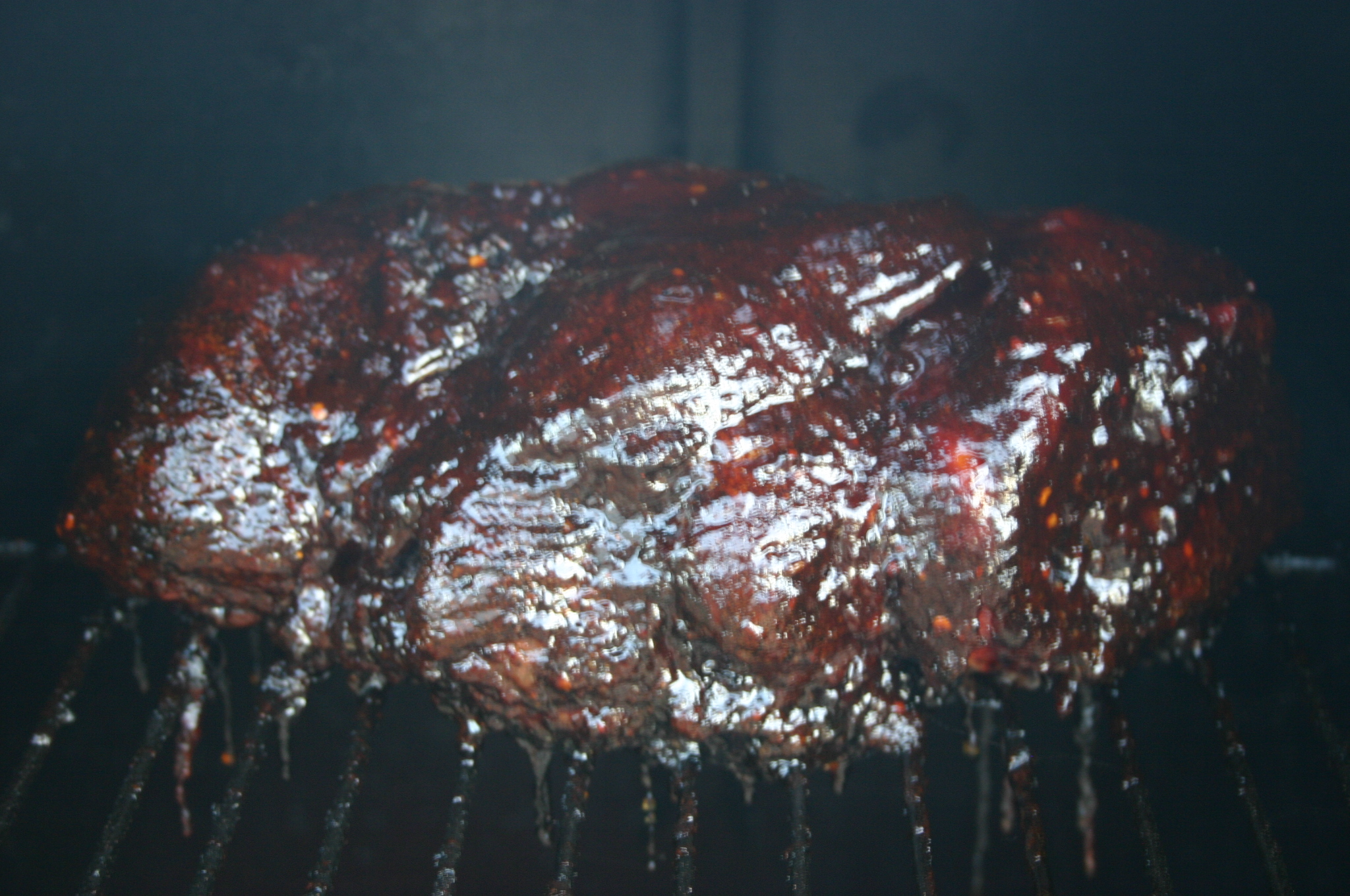 Sticky with sweetness, cayenne pepper and vinegar, that glaze starts building layer by layer. With the smoker holding temperature at about 210, and the pork registering in the 170s, the basting continued about every 5-7 degrees gained. I assumed a position that allowed a great view of the action while enabling me to enjoy a pit side beverage. 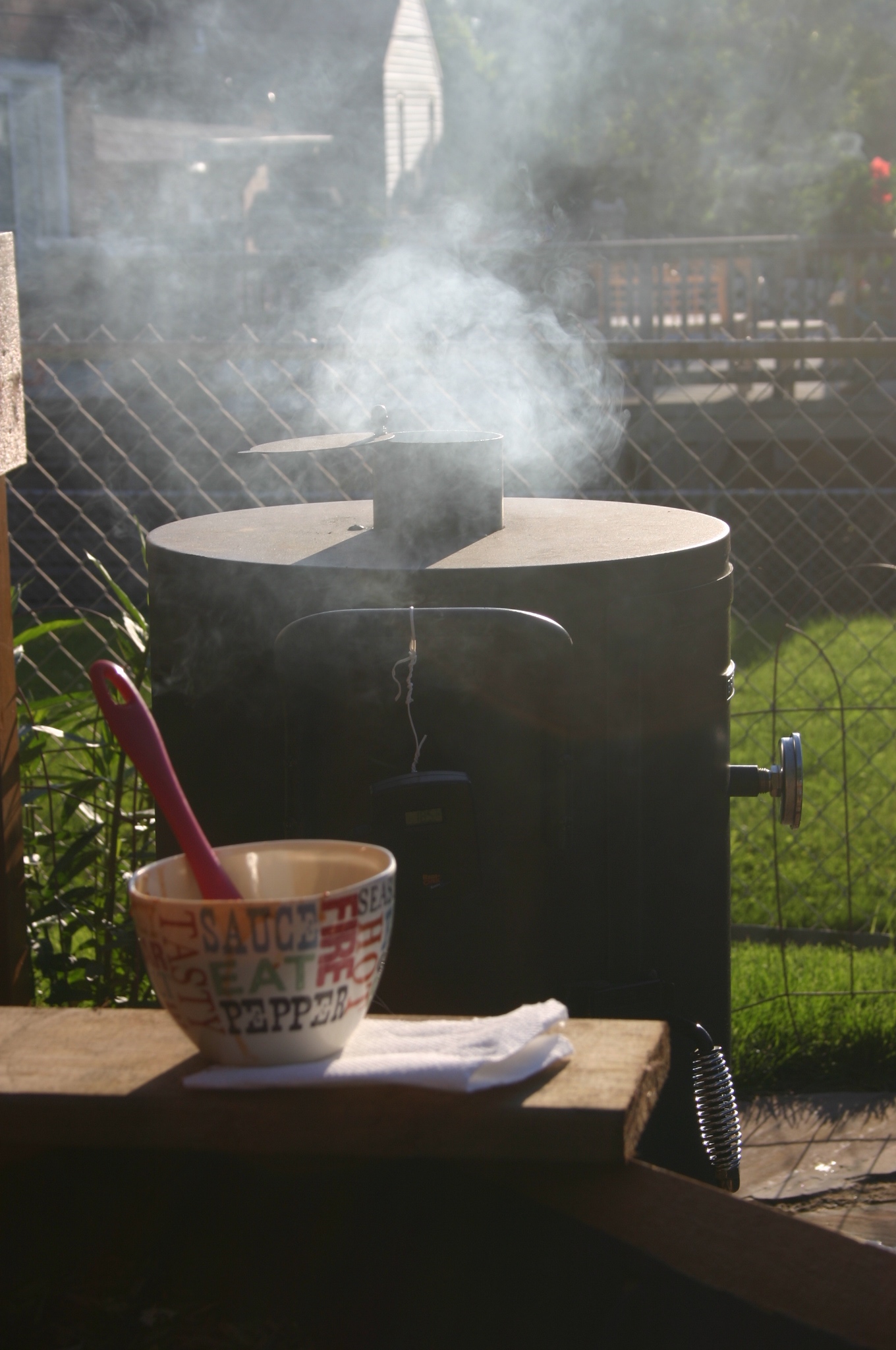 When that magical temperature hits, around 190-195 degrees internal, it’s time to bring that hunk o’ pork in, tent it, and let it rest just a bit. 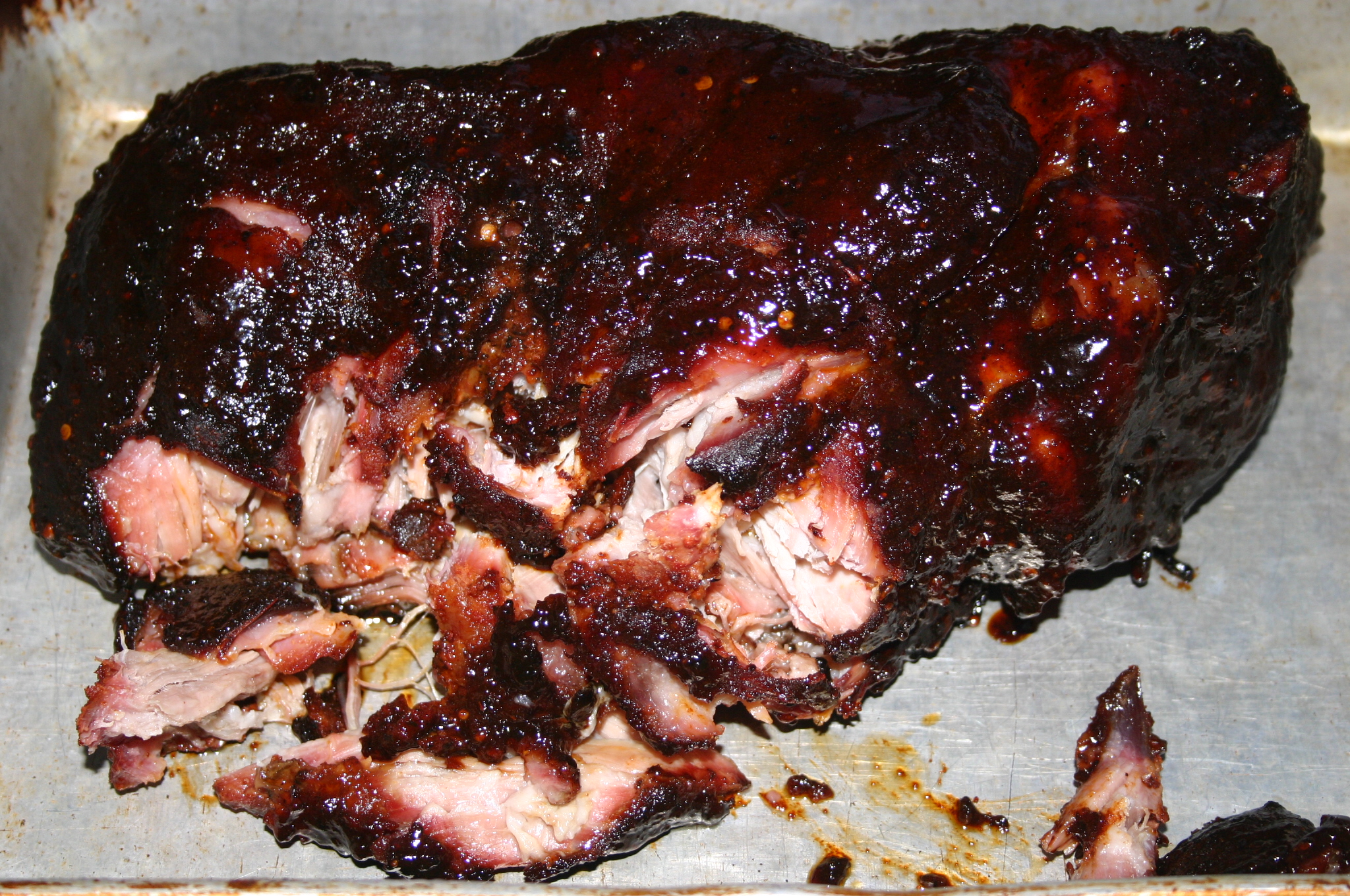 And then do a little pulling. But keep pulling or you’re going to start eating, and when you start eating, there’s no telling how far you’ll go, because the juicy pulled pork combined with a nibble of bark in each bite can be quite addicting… 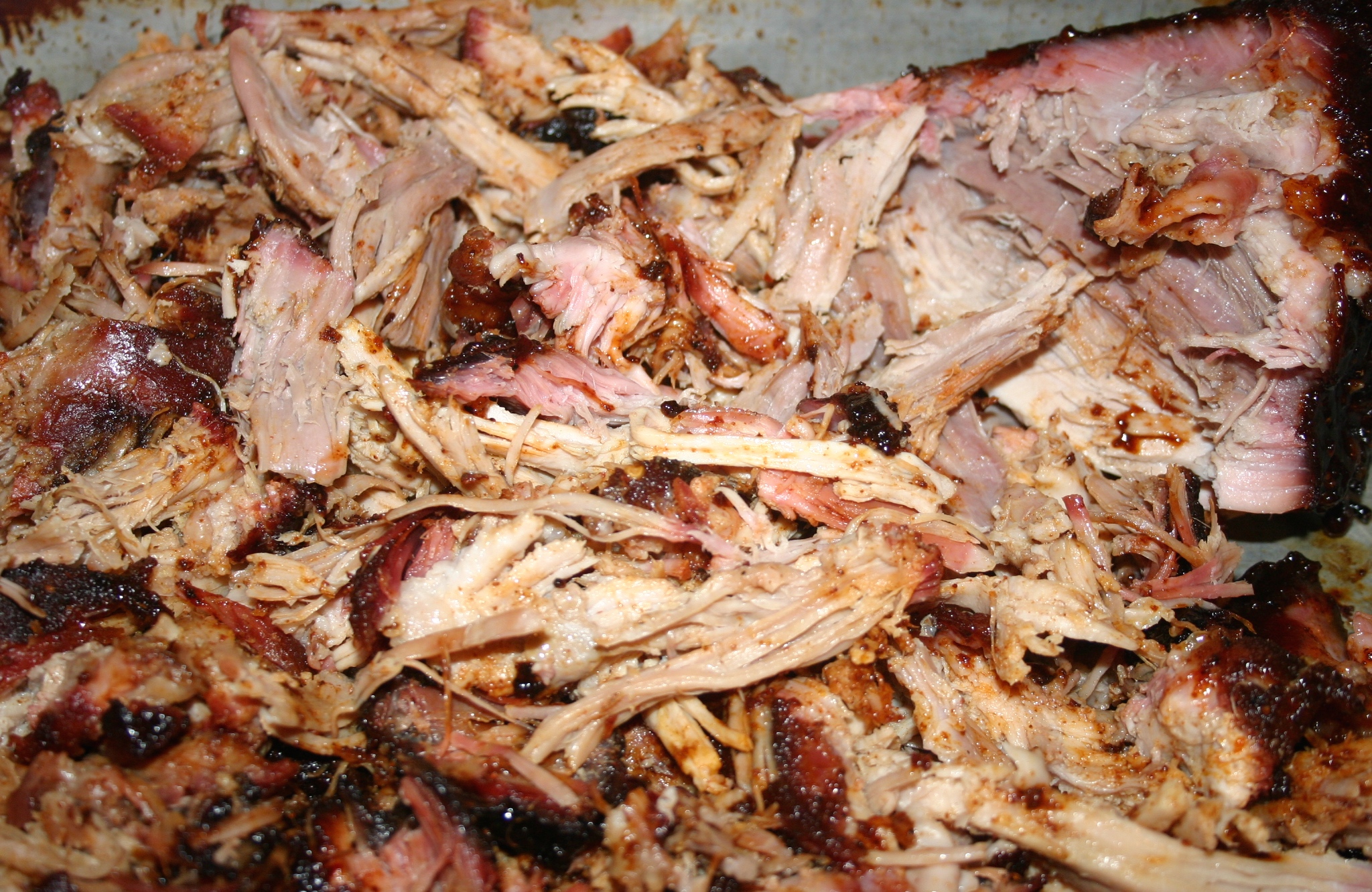 Because Life Is Better wood Fired