Ironically, I can see it only by closing my eyes. The Chinatown vendors in their colorful selling spaces, bustling about while visitors move up and down the street looking over their wares and food offerings. The aroma on the street is enticing, like a sirens song to a wayward sailor. Nose lifted upward, it leads the body to the origin of the sweet and spicy infused wisps of smoke spiraling to the heavens. Once there, the eyes slowly open in anticipation of the adventure. But instead, the eyes adjust to the sunlight, revealing…our backyard. 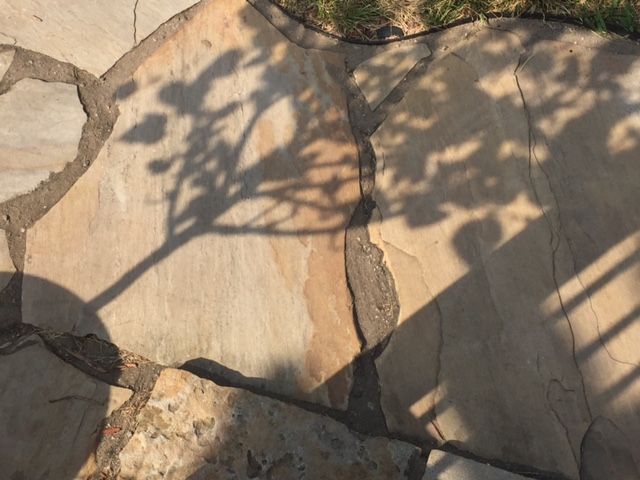 Yep, it’s just me, in my backyard. Sadly, I am without the colorful displays, tents, booths, and handmade items for sale. Those smells though, are real, and emanating from my trusty Weber. My plan for the day is to replicate that great aroma, flavor, and appearance of the Char Siu Pork that a Chinatown market might offer for sale in their tents, market booths, and store fronts. Time for some Char Siu Pork, with a side of pot stickers pan fried in cast iron over a wood fire for good measure.

First things first, as the saying goes, and the first thing, and the most important thing in this dish, is to make the marinade for the pork tenderloin that we are using. The recipe is from Steven Raichlen’s newest book, Barbecue Sauces, Rubs, and Marinades-Bastes, Butters and Glazes, Too. Venture over to pages 53 and 54, and you’ll come across the Char Siu marinade, and story behind it.

With ingredients featuring Honey, Soy Sauce, Oyster Sauce, Hoisin Sauce, Rice Wine, Sesame Oil, Chinese Five Spice Powder and Ground White Pepper, you know that this combination marinade and later, glaze, will have depth and richness in flavor and color.  All that goodness is mixed thoroughly, and then poured over the pork to marinate overnight.

The next day, which coincidentally was the day I had been anticipating since the last day, I set up the grill for indirect grilling, with the hot coals shoved over on one side of the grill, and nothing but open air on the other. A plate of pot stickers was readied for their appearance a little later in the cook. By readied, I mean tossing them onto a plate for easy pick’ens later on.

The tenderloin was unceremoniously yanked from the marinade bag and laid on to the indirect side of the grill. The cover to the grill is put back on, leaving the pork to start its Char Siu conversion at about 400 degrees. 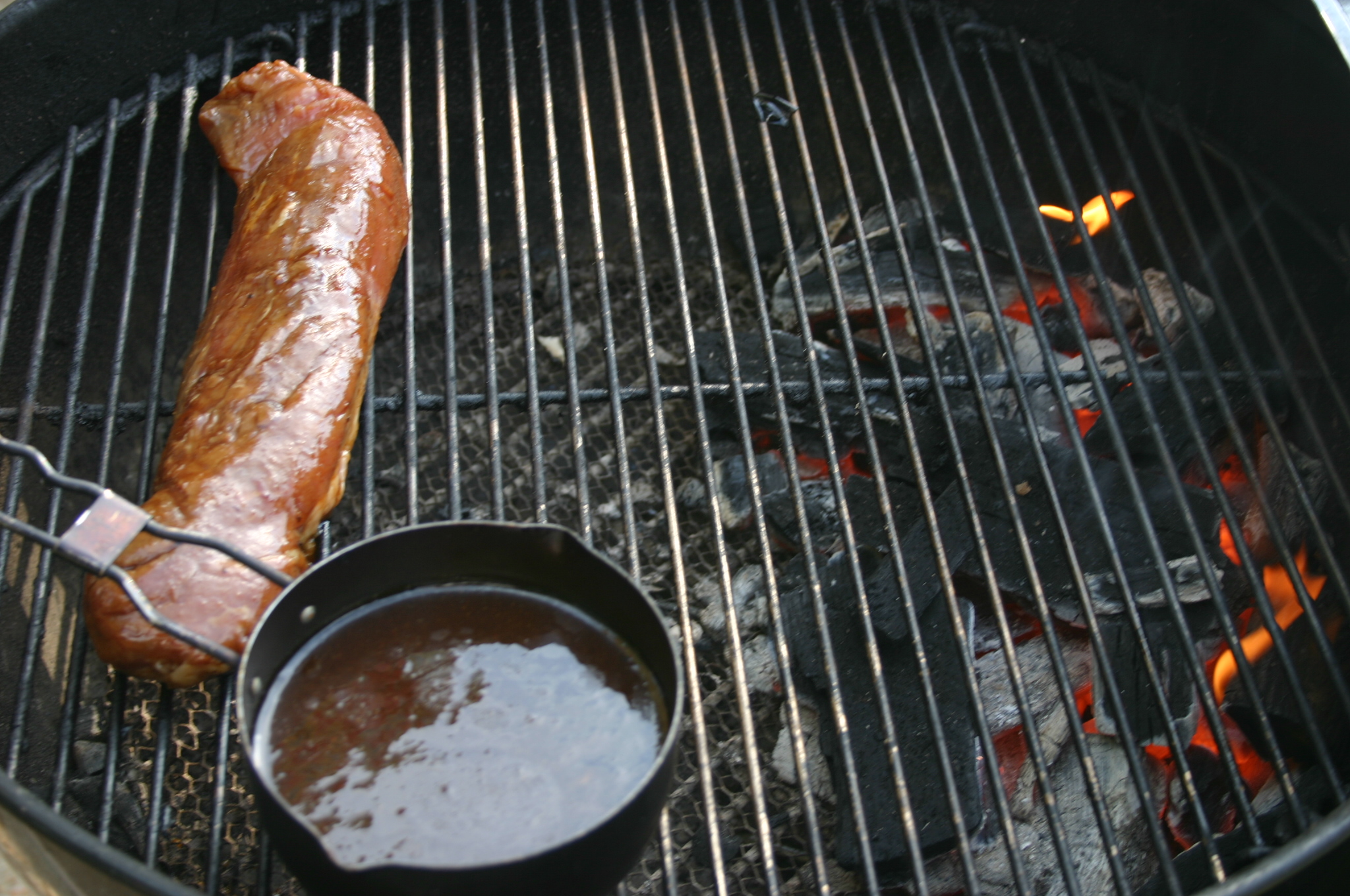 The remaining marinade was poured into a grill pot, and put near the coals to boil and thicken. You want the reserve marinade to boil for at least 3 minutes before brushing onto the meat.

But once that mark is hit, brush early, brush often, and watch the glaze build that sexy Char Siu color. Hit that pork with a thick brushing about every 10-15 minutes. 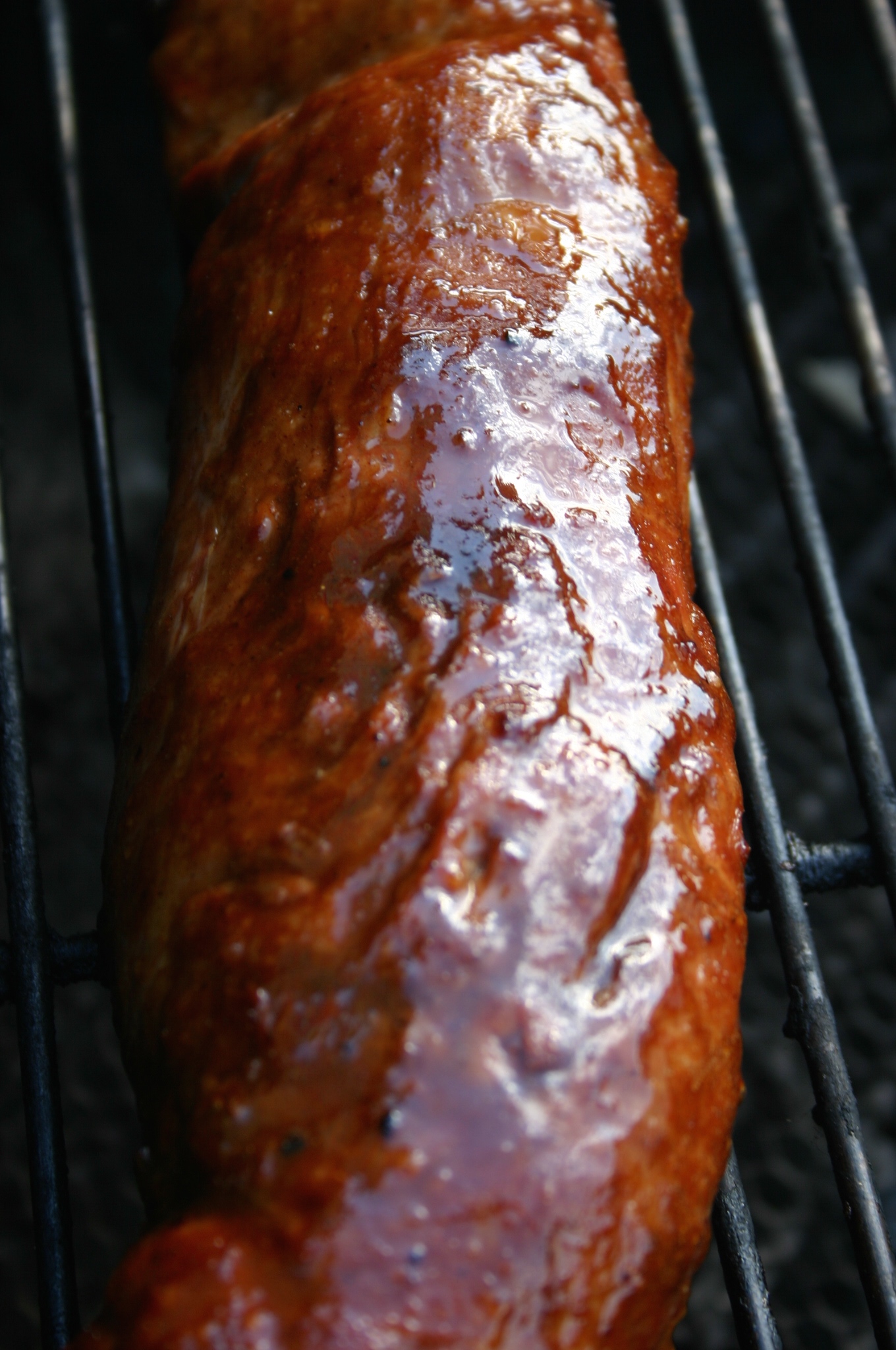 When the tenderloin reaches the 130 degree mark, grab a cast iron pan, put a little oil in it, and set it over those hot coals to preheat.

Get it screaming hot, and put the potstickers in the pan. 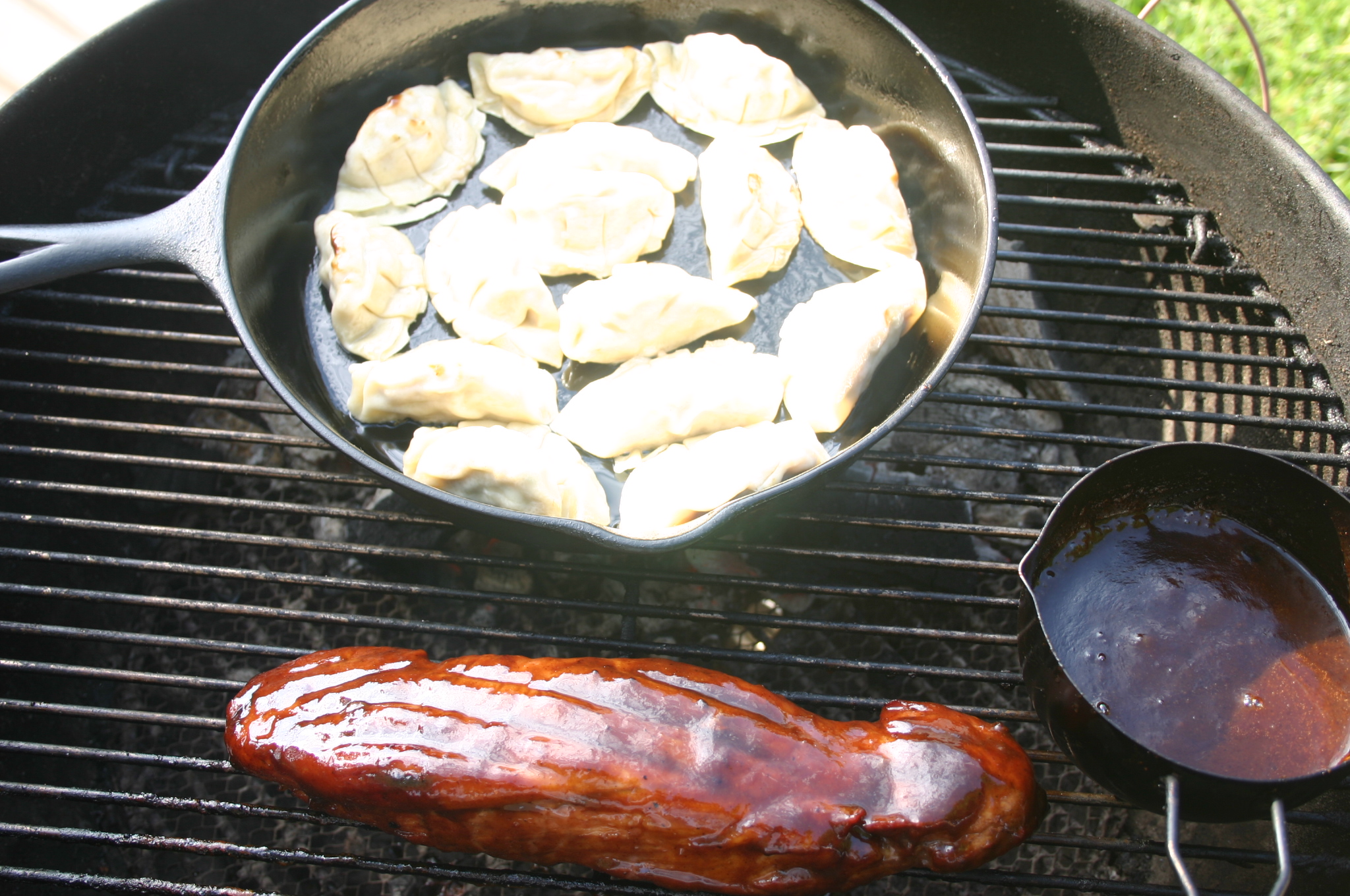 After a couple of minutes, commence the flippin’, 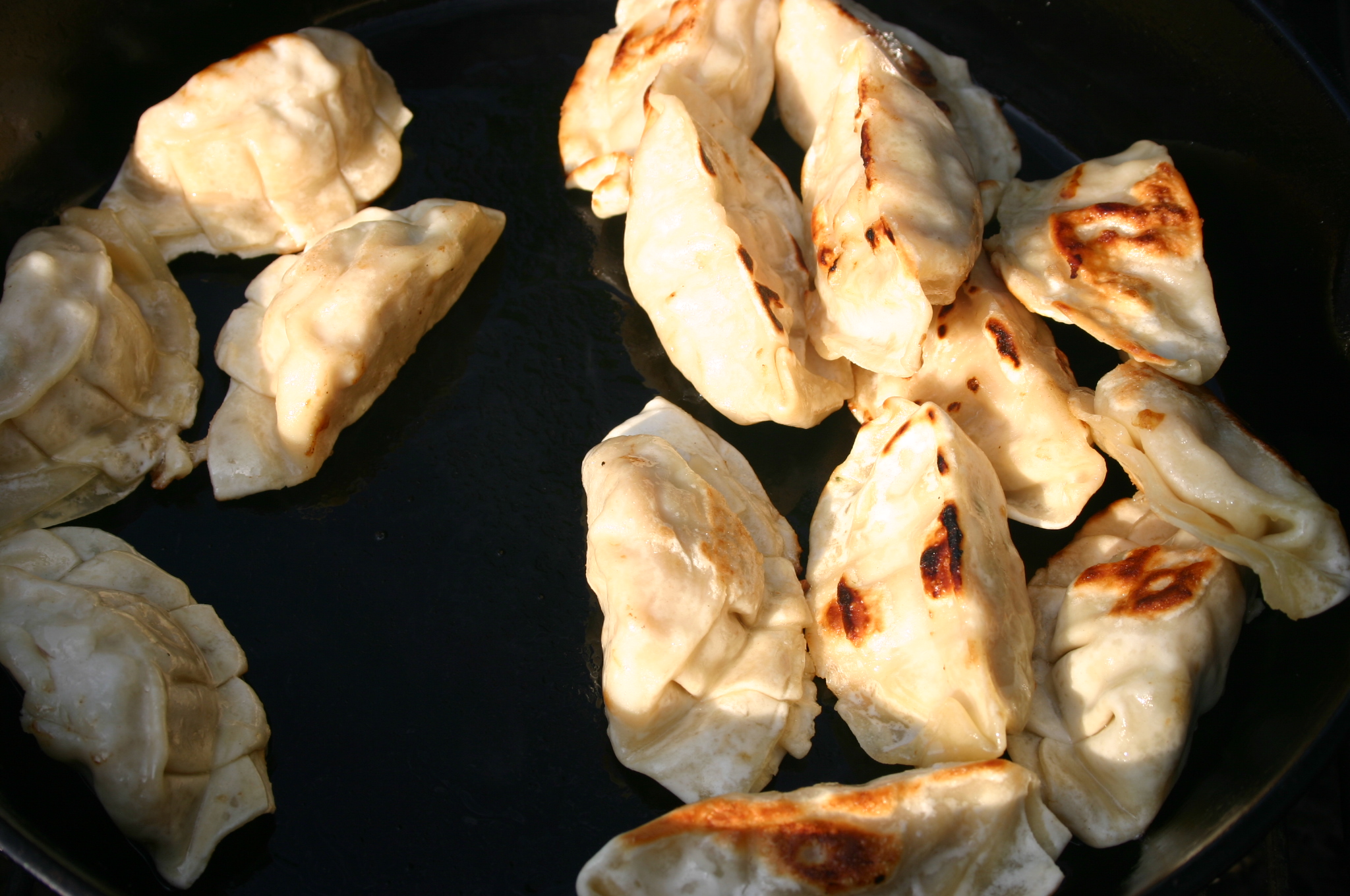 And when they’re flipped, switch the positions on the grill of the pork and the pot stickers. The pork should get a slathering of the glaze on it, and then laid over the hot coals to start the caramelization magic.

The pot stickers will finish about the same time as the pork, so no lollygagging here. You had your chance earlier. Pull the potstickers and put them on a plate to cool, and once the pork is at 150 degrees internal, pull that too, and put it on a serving plate to rest. Tell everyone within earshot to “Wait!”, even though that Char Siu glaze is filling the air with a great aroma that’s not quite Chinese, not quite Barbecue, but somewhere in the middle where the combination meets in the perfect blend of balance and flavor. Get that quick picture out of the way and then let the serving begin. 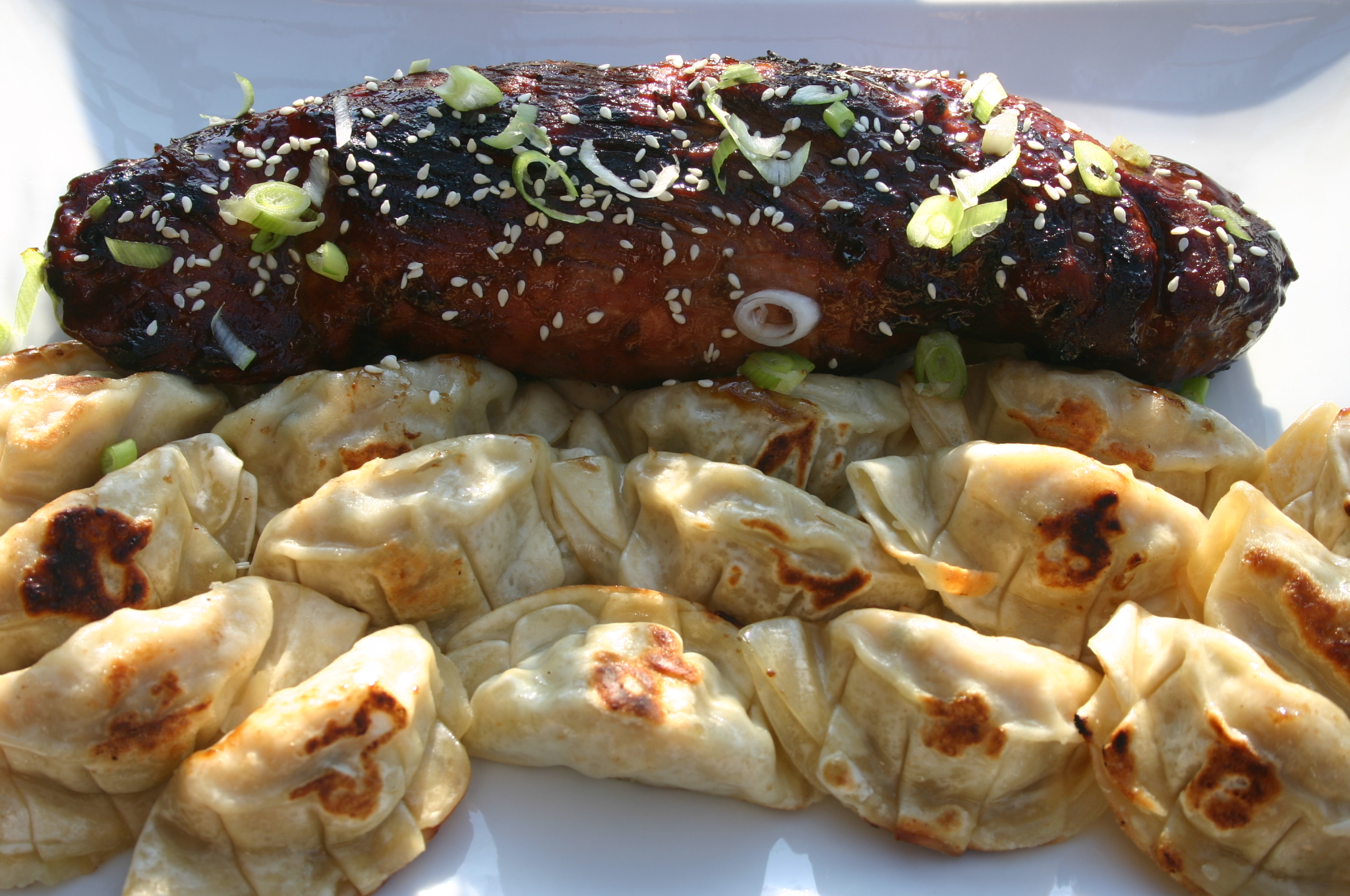 Don’t hesitate to drizzle the rest of that warm Char Siu sauce over both the pork and the pot stickers, because if I learned anything from this backyard cook, it’s that this sauce can be used on anything you eat to add flavor, character, and sticky fingers. 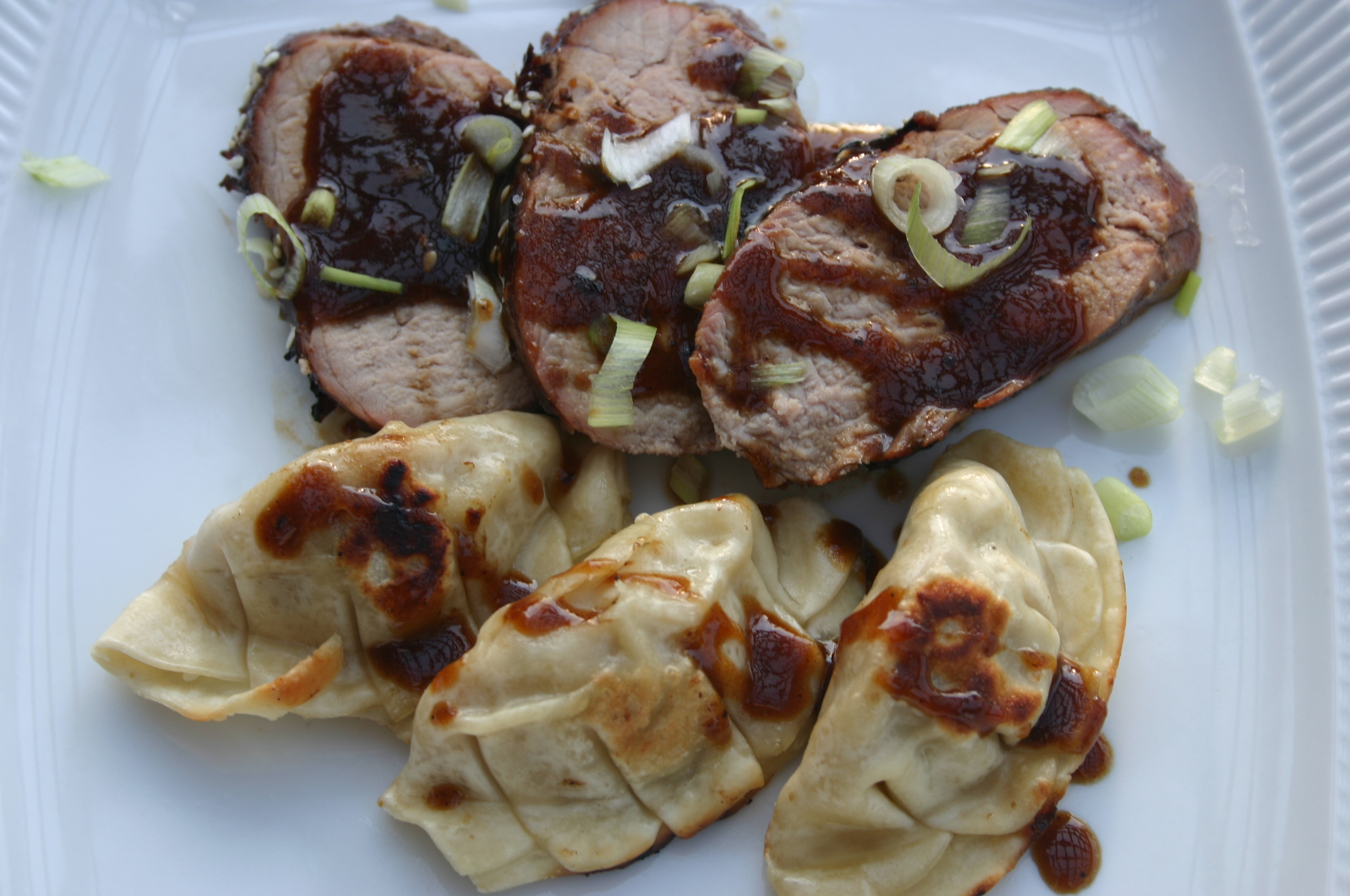