Smoked Corned Beef, And Not A Leprechaun In Sight

It doesn’t have to be this way, you know. Certain foods for certain days, seasons, or times of the year. You know what I’m talkin’ about. No ice cream for breakfast. No wine or whiskey before, what, like noon or so? Taco Tuesdays. Brown sugar and pineapple glazed ham for the Easter holiday. A big, gorgeous, roasted turkey and stuffing for Thanksgiving, and of course the tradition of corned beef for St Patrick’s Day.

It doesn’t have to be that way.  A food hankerin’ should be met, by golly. Take today, for example. We’re feeling like a delicious, tender, corned beef sandwich on pumpernickel rye, and as sure as that mosquito that just flew by is gonna take a bite out of my leg here in a minute, we’re

gonna have that sandwich, St Patrick’s Day or not. We just don’t care when we get a case of the hungries. But our corned beef brisket is going to be prepared in the smoker, kissed by a combination of hickory and peach wood. The smoker is set up and lit, using the minion method. Weaved within the hardwood coals are hickory chunks and peach chips, spaced out to give those constant wisps and puffs of enticing smoke action throughout the cook.

A prepackaged corned beef brisket is a great choice of this type of smoke, and it was rinsed thoroughly to get rid of the excess salt solution. You can rub or coat the corned beef with anything you like, but I like to go simple with this classic cut, so a shower of cracked black pepper and a generous slathering of a stone ground mustard is all that’s needed.

With the smoker temps hovering from 225-230, the hunk o’ beef is laid in the smoker over a water pan that  included 12 ounces of a quality brown ale, and brother, I’m telling you that the smells already coming out of that smoker were already enough to get the jowls watering. Once the corned beef hit the 155-160 mark internal, I took it off the grill rack and put it into an aluminum pan, with more beer, just so I could start collecting the meat juices. It was starting to build that nice mustard crust that tastes so darn good with the corned beef.

Then back into the smoker with a replenishment of wood. Occasionally, about every half hour, I could be seen getting up out of my grilling chair, moseying over to the smoker, opening the door and slowly basting the brisket with some of the juices from the pan.

The aroma was enough to make you look to the heavens, but then, well, you might spill some of that juice, so don’t do that. Instead, close the smoker back up, grab a pit side beverage, and just do some backyard lollygagging until the corned beef reaches the 203 degree mark, and it will. Pull the pan with the corned beef in it, plus those juices, and wrap it all in foil, then wrap it all again in a couple of old towels, and put in a cooler to rest for a while. Your tastebuds will thank you.

Once this beauty was unwrapped, about an hour to an hour and a half later, it was clear that our cravings would be satisfied today.

Slicing the tender brisket was easy. So was sneaking a piece to taste just by giving it a little tug. The “griller’s cut”, I think they call it, but heck, you don’t have to call it anything if no one sees you do it.

I started out by saying I wanted a corned beef sammie on pumpernickel rye, so once sliced, the sandwich was built, including sauerkraut, swiss cheese, and thousand island dressing. The whole shebang was grilled properly, creating a crispy, mustard encrusted, smoked corned beef sandwich, flanked by broccoli slaw, green beans, and a little more kraut. So good, and not a leprechaun in sight. 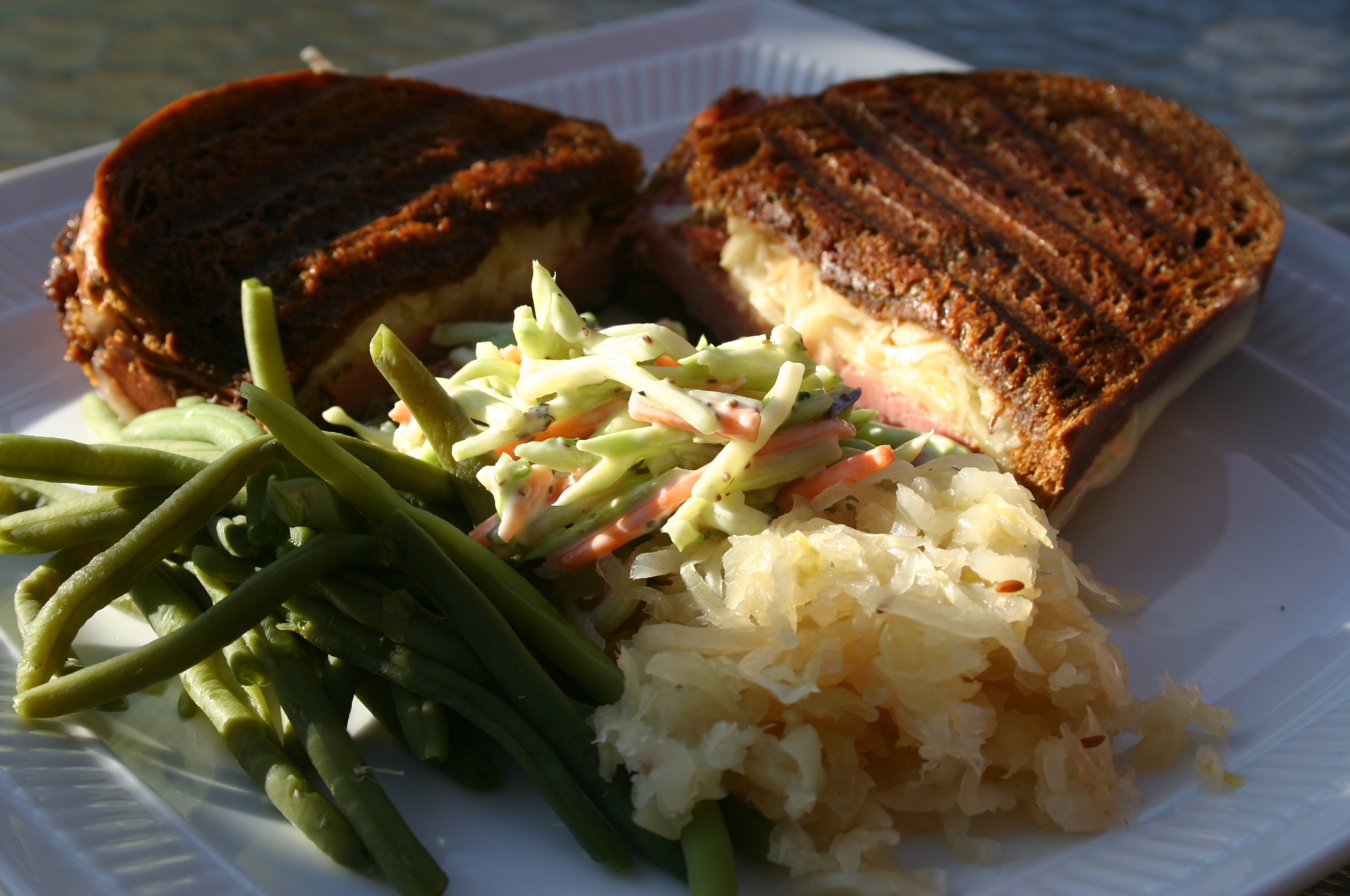